Your gift to the University of Iowa makes a difference. By giving to your Iowa passion, you help change the lives of our students, our community, and the world.
About
Leadership
Accountability
The University of Iowa Center for Advancement helps UI friends and alumni stay connected, get involved, and give back.
Home Iowa Stories A Game-Changing Gift for the Future of Hawkeye Football

A Game-Changing Gift for the Future of Hawkeye Football

Will Moon (83BBA) arrived in Iowa City at the perfect moment for a football fan. In fall 1979, Moon’s freshman year at the University of Iowa, Coach Hayden Fry was just beginning his revival of the Hawkeye program. Moon was captivated by the daring brand of football Fry brought to Kinnick Stadium. “From that point on, Iowa football was fun again,” Moon says.

Similarly, some of the fondest college memories for Renee Breckenridge Moon (84BS, 88DDS) revolved around Hawkeye sports. That includes the night she camped out with her sister and friends to secure men’s basketball season tickets following Iowa’s 1980 magical Final Four season. “We had pizza delivered to the front steps of the Field House,” Renee recalls.

Today, the Moons are two of UI Athletics’ most generous supporters, and they’re committed to ensuring future generations of players, coaches, and fans can make their own lasting Hawkeye memories. The Bettendorf, Iowa, couple recently made one of the most significant gifts in the history of Iowa Athletics, the impact of which will be threefold:

In recognition of the Moons’ support, Kirk Ferentz and all future UI head football coaches will hold the title of Moon Family Head Football Coach.

"As we have become better acquainted with Will and Renee, it has become very clear they embody a true spirit of generosity," says Ferentz, the winningest coach in Iowa history and longest tenured football coach in the nation. "Their commitment in making this gift, in the midst of a pandemic, is a remarkable commitment to their belief in our programs and student-athletes.

"Renee and Will are dedicated to the betterment of Iowa athletics. Their gift of this magnitude will prove beneficial for Iowa student-athletes for years and years to come. I am so appreciative of their generosity, and their continued dedication and commitment to the University of Iowa and Iowa Athletics. More importantly, we value their friendship and appreciate their unwavering support of our football program."

By creating an endowment, a portion of the Moons’ donation will be invested into a fund that will generate a steady stream of income for Iowa Athletics and the football program in perpetuity.

"Will and Renee are passionate about the university, they’re passionate about Iowa athletics, and specifically they’ve been very supportive of Hawkeye football," says Gary Barta, the Henry B. and Patricia B. Tippie Director of Athletics Chair. "They understand the importance of private contributions to Hawkeye athletics, and even more so during the challenging times related to the pandemic. They’re supporting the program for today’s needs, but also, by creating an endowment, they’re providing a way of supporting Hawkeye football forever." 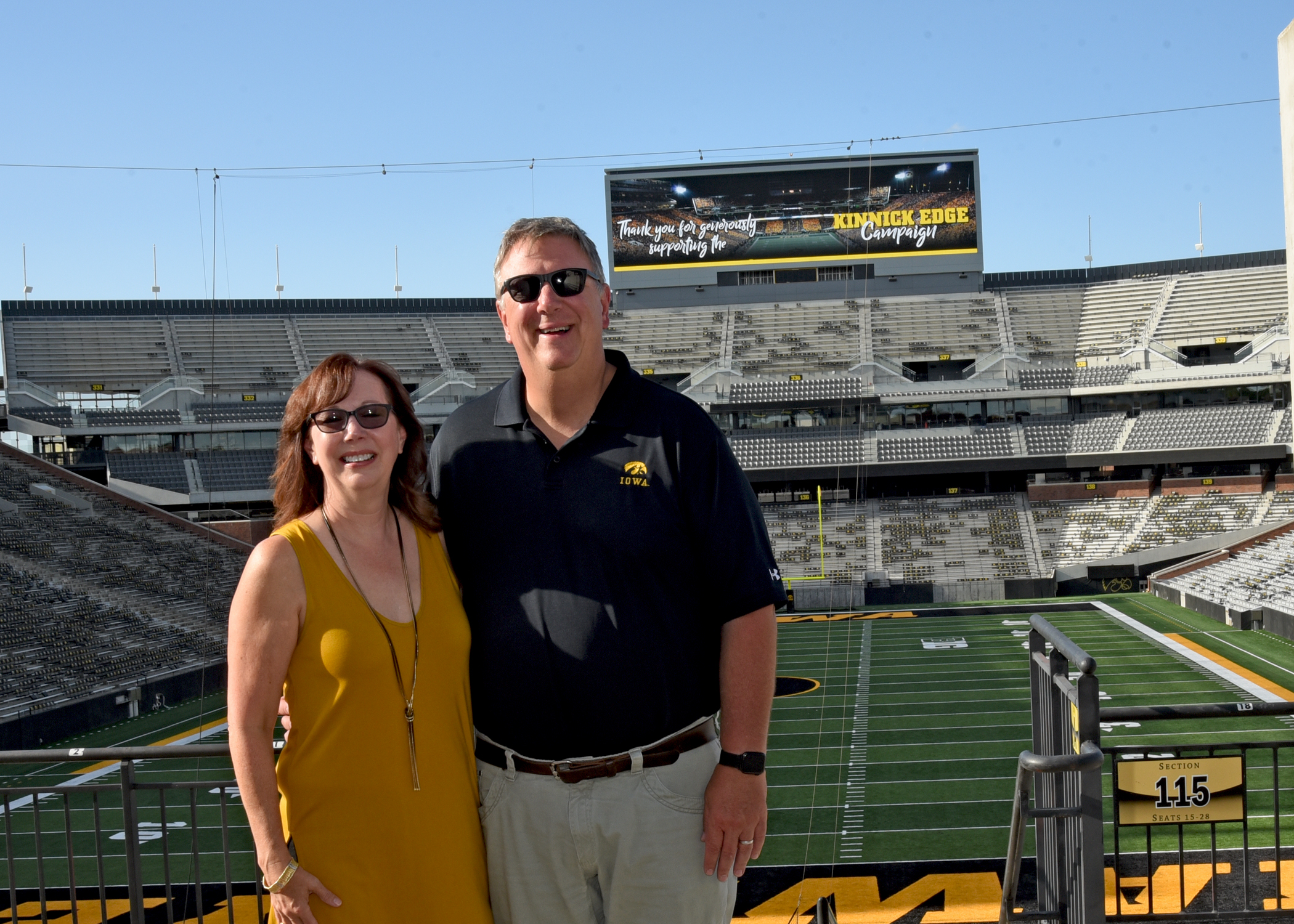 Just as Kinnick Stadium has drawn generations of fans, visitors have long flocked to another Iowa landmark about 45 minutes east of Iowa City. Frequented by about 5,000 travelers each day, including plenty of UI students and fans traveling to and from campus, the World’s Largest Truckstop has grown into a regional attraction along Interstate 80.

Will Moon’s parents, Bill and Carolyn, opened the original Iowa 80 Truckstop for Standard Oil in the 1960s near Walcott, Iowa. Bill eventually passed the ownership reins to Will Moon and his two sisters, Delia Moon-Meier (87BBA) and Carolyn Jill Moon (89BA). Today, the World’s Largest Truckstop is home to eight restaurants, a Super Truck Showroom, gift shop, convenience store, movie theater, the Iowa 80 Trucking Museum, and a long list of other amenities for truckers and travelers.

As a teenager working at the truck stop over the summers, Will became interested in the family business and its operation. With an aptitude for math, Will choose to attend the UI to study accounting—an education he credits for paving the way for a successful business career.

"Accounting is really communication; you’re communicating the results of your efforts in a business to other people," says Will. "I really picked that up at Iowa, and I think that’s helped me immensely in business. I’m not a practicing accountant and I never was; but I certainly used my training to be a better manager. I can’t imagine a better foundation for my career."

An Ottumwa, Iowa, native, Renee Moon comes from a family steeped in Hawkeye tradition. Her older brother and twin sister graduated from the UI, and Renee’s oldest daughter later followed in her mother’s footsteps to Iowa City. After studying math and education as an undergraduate in the 1980s, Renee stayed put at Iowa for dental school. That UI College of Dentistry training laid the groundwork for a long career in family practice in Cedar Rapids.

Even more, it was Will and Renee’s love for the university that helped bring them together. Their first date was in 2009 at The Airliner in downtown Iowa City, where they watched the Hawkeye football team defeat Penn State. Since then, they’ve cheered on countless more Iowa wins inside Kinnick Stadium and while following the team on the road and to bowl games. In recent years, the Moons have even purchased a condo close to Kinnick Stadium and Carver-Hawkeye Arena for game days.

"Some people have a second home in Florida; we have one 45 minutes west of us," laughs Renee. "But it makes tailgating a little easier."

A History of Hawkeye Philanthropy 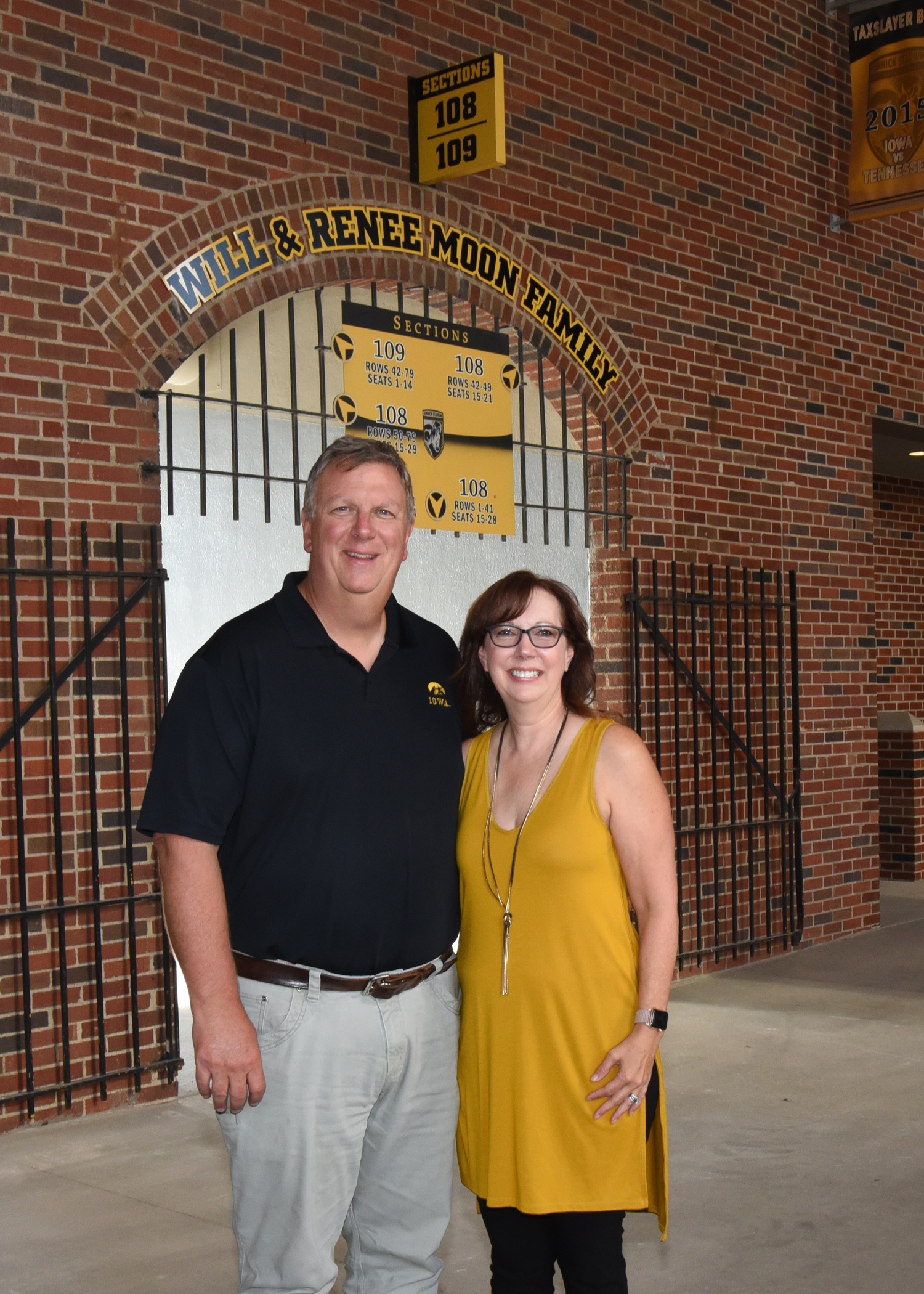 The creation of the coaching endowment and excellence fund, along with the support for the Kinnick Edge campaign, are just the latest chapter in the Moons' long record of philanthropy. Their generosity has elevated the experiences for Hawkeye student-athletes, coaches, and fans alike.

Will’s support of UI Athletics as a donor began more than 20 years ago, when he joined a group of Hawkeye backers called the Davenport Quarterback Club at the invitation of former Hawkeye Jim Hilgenberg (77BBA). Will soon became a loyal I-Club member and has provided financial support to a number of UI athletics projects, including the Kinnick Stadium renovation completed in 2006, the Carver-Hawkeye Arena expansion and refurbishment completed in 2011, and construction of the Hansen Football Performance Center completed in 2014.

For many years, Will has purchased blocks of tickets for football and basketball that he’s given away to employees and friends. But after receiving more bottles of wine as thank-yous than he knew what to do with, he established the Will and Renee Moon Athletic Scholarship in 2019 with an initial donation. He now redirects those thank-you gifts—and Christmas gifts—to support student-athletes. "I'll just say, 'Why don’t you just make a donation to the scholarship fund?'" says Will.

The Moons hope their latest gift fortifies the future of the Hawkeye football program by addressing short-term needs through the discretionary fund, while also providing lasting stability through the coaching endowment. “Obviously I hope it helps the program, but the program, to me, is not just about winning the games,” says Will. "What I’ve been impressed with over the years is the quality of coaches and the student-athletes. Whenever we have had occasion to meet a Hawkeye student-athlete, current or former, I’ve always been impressed with how thoughtful they are—certainly much more than I was at that age."

Adds Renee: "Coach Ferentz and Mary Ferentz are both just wonderful people. It’s an honor to be able to help them continue the job they’ve been doing. We don’t need our name to be out there; we’re doing this because we enjoy the Hawkeye football program, and we are doing it for them."

Barta says the endowment will make the position even more attractive to future coaching candidates by demonstrating the commitment of Iowans like the Moons to the program. "They’re not anxious for publicity in sharing the information about this gift, but they’re willing to do it because they hope it encourages others to follow their lead," Barta says. "They’re just great people, and this is an incredible gift. I can’t say how much we appreciate it and how thankful we are they made this decision."

While fans had to cheer from home this past season because of the pandemic, the Moons hope their gift demonstrates Iowans' continued commitment to the program during this challenging year financially for college athletics. “Everybody wants to support when things are going good; it’s easier to do that,” says Will. "But in more difficult times, that’s the time you really need to step up. And it won’t be difficult forever."

The Moons look forward to the day when they can once again cheer for the Hawkeyes as they swarm from the Kinnick Stadium tunnel. Until then, their gift will help ensure the program remains on firm financial footing. Says Renee: “When we can do ‘Back in Black’ again, I want to be there.”