Your gift to the University of Iowa makes a difference. By giving to your Iowa passion, you help change the lives of our students, our community, and the world.
About
Leadership
Accountability
The University of Iowa Center for Advancement helps UI friends and alumni stay connected, get involved, and give back.
Home Iowa Stories Iowa's World-Class Wrestling Facility to be Named for Iowa Supporters

Iowa's World-Class Wrestling Facility to be Named for Iowa Supporters

By Ben Frotscher
Iowa City, known as the worldwide home for wrestling, will open a state-of-the-art wrestling facility in 2024. 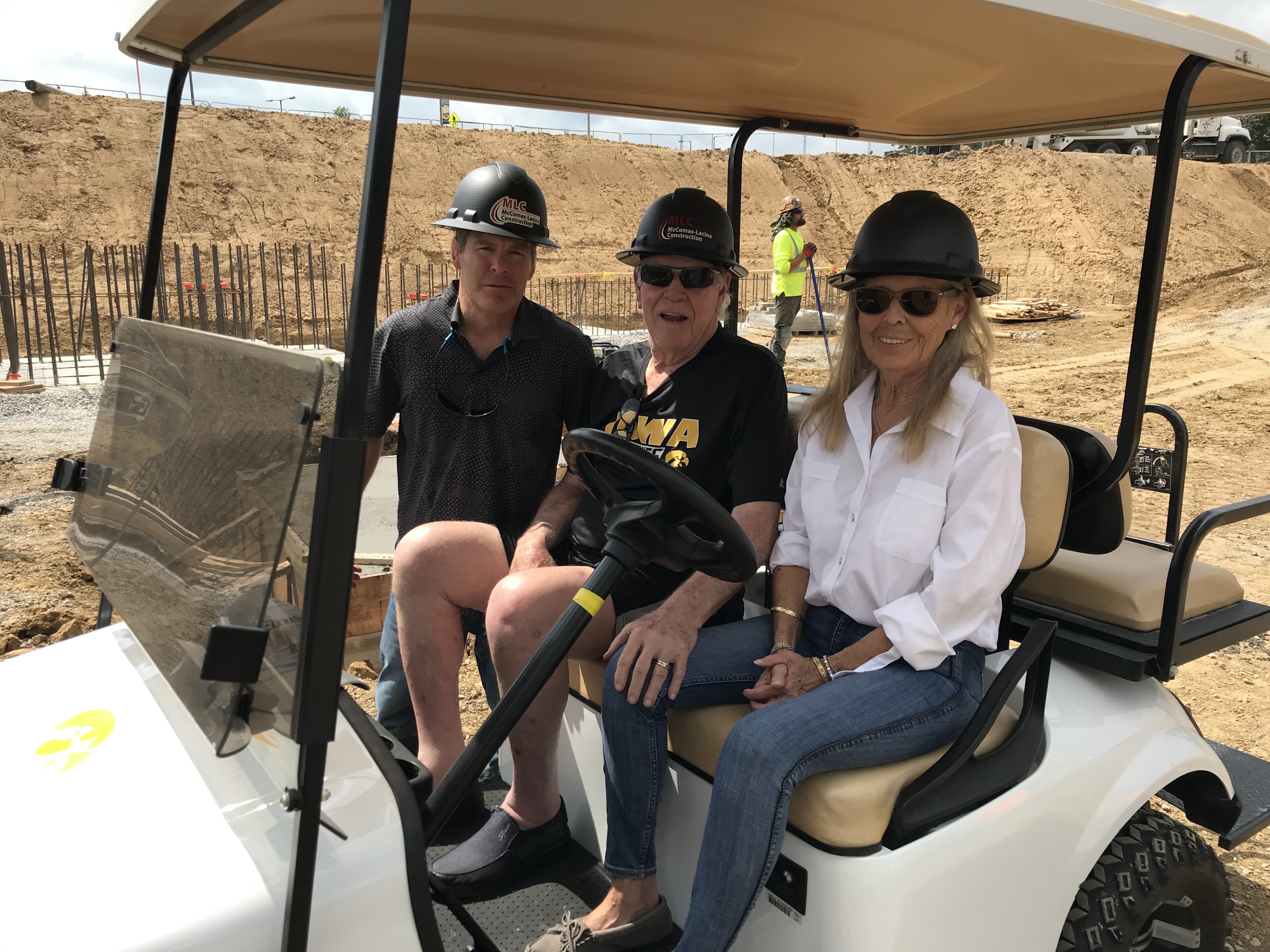 The University of Iowa's new home for wrestling has a new name.

Pending Board of Regents, State of Iowa, approval at its meeting on Nov. 910, the University of Iowa will name its new world-class wrestling training facility in honor of Doug and Ann Goschke's generous support.

Construction of the proposed Goschke Family Wrestling Training Center began in June and is being built adjacent to Carver-Hawkeye Arena, the home of Iowa wrestling for almost 40 years.

"Doug and Ann have always had a passion for giving back, and we're thrilled that they've helped the Carver Circle fundraising campaign reach this important moment," says Gary Barta, who holds the Henry B. and Patricia B. Tippie Director of Athletics Chair. "In recent years, the Goschkes have been some of our most generous, loyal, and invested Hawkeye fans. We're excited to honor their game-changing gift for this new facility, which has been built thanks to the contributions of so many Hawkeyes."

Shortly after the Iowa men's wrestling team claimed the 2021 NCAA team title, the Goschkes met Head Coach Tom Brands (92BS) and Spencer Lee (21BS), a three-time NCAA individual champion. It was an experience the Goschkes, of Iowa City, have not forgotten and served as a catalyst for their $7 million gift commitment to the Carver Circle campaign.

"After we met with Coach Brands and Spencer, we immediately gained a greater appreciation of the philosophy of Iowa wrestling," says Doug. "We saw many similarities between Iowa wrestling and how we raised our family and built our business. It took our passion for Iowa wrestling to a new level, and both Ann and I are thrilled to support Iowa's wrestlers in this way."

Brands, who enters his 17th season leading the Iowa men's wrestling team, is enthusiastic to begin the next phase of the Carver Circle campaign, which is closing in on raising $31 million for a new 38,500-square-foot training facility for Iowa's men's and women's wrestling squads.

"Our vision was to build the best training facility in college wrestling," says Brands. "As Doug and Ann Goschke's relationship with Iowa athletics grewand they started to understand our visionthey were 100% on board. They recognized why this project was a must for our program and were eager to get behind it. The Goschkes have helped us reach the finish line. They are great Hawks, and we are proud to have their name on this facility."

Wrestling Room to Be Named for Nicolls Family

The proposed Goschke Family Wrestling Training Center will be equipped with a 13,000-square-foot wrestling room, a strength training area, team locker rooms, and athletic training facilities. The facility will also include staff offices, a student-athlete lounge, recruiting meeting rooms, and a street-level hall of champions dedicated to the success of Iowa wrestlers of past, present, and future.

The new wrestling room will double the amount of training space and will allow Iowa's collegiate wrestlers and members of the Hawkeye Wrestling Club to train at the highest level. That space will be named in honor of Bob Nicolls (80BBA) and Kathy Nicolls, of Franktown, Colorado.

Bob Nicolls has been a passionate Iowa wrestling fan since his time as a student, and the couple are generous supporters of Iowa's track and field and wrestling teams, as well as the UI Department of Accounting. To honor the Nicolls' $7 million gift to the Carver Circle campaign, the wrestling room will be named in their honor.

"Bob Nicolls got this campaign started," says Brands. "He stepped up right away, brought others to the table, and never wavered in his commitment and drive to help us get this project done. He's been the lead volunteer on this project and a great friend to our program and me. We are honored to have the Nicolls' name on our wrestling room. It can't be anyone else. That's how important Bob Nicolls was to getting this campaign done."

Please help Iowa wrestling stay at the top of the podium by making a gift online today!